The idea is based on the concept of Wall of Worry in financial markets. Typically, this term describes an uptrend in negative news. Despite them, the market continues to grow, although the trend looks unstable. I was wondering if it is possible to assess this concern using an indicator. To do this, I made the assumption that the worry technically looks like candle shadows. Because it is in the shadows that the main struggle takes place, between bulls and bears. Some believe that growth will continue, while others believe otherwise. In addition, it is important to assess how irreconcilable they were, i.e. the amount of volumes on these shadows.

The indicator displays three lines that are displayed in a separate window. The indicator has the following input parameters:
Display_Bars = 500 – the number of displayed bars (at 0, all are displayed, but not always because it depends on the depth of history).
MAPeriod = 10 – moving average calculation period.
Accuracy = 20 – calculation accuracy. The higher the more accurate, but at the same time the load on the processor increases. 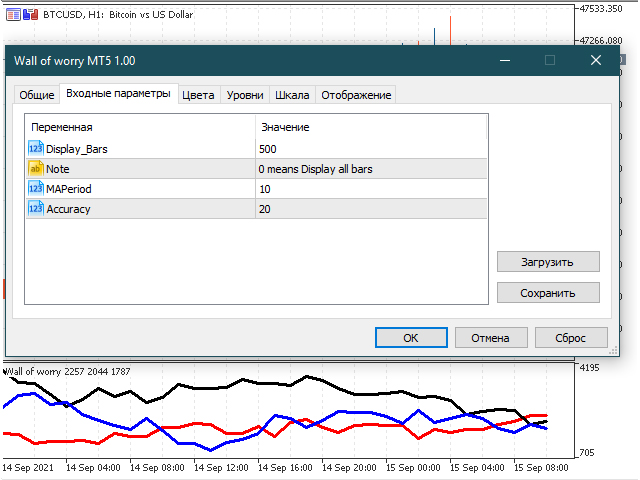 The indicator is calculated based on tick volumes in the terminal. Then they are converted into horizontal volumes, then the lines themselves are calculated. It looks like this.
For example, we break a candlestick on a 5 minute timeframe into 5 candles from a 1 minute timeframe. Further, I assume that on the smallest timeframe, the horizontal volume is evenly distributed over the entire candlestick. After that, we divide our candlestick from the larger timeframe into equal parts (parameter Accuracy 6 in this case).
Next, we look line by line to see if there are parts from other candles in this line, if so, add up a part of the candle volume from a smaller timeframe. As a result, we get the distribution of volumes for our candlestick. Next, it is calculated how much of a given horizontal volume is occupied by a shadow or a body. The upper shadow takes up about 50% of the first row of volumes. This means that the red line of the indicator will be equal to 145. Other lines are calculated in the same way. It is more clearly demonstrated in the figure below. 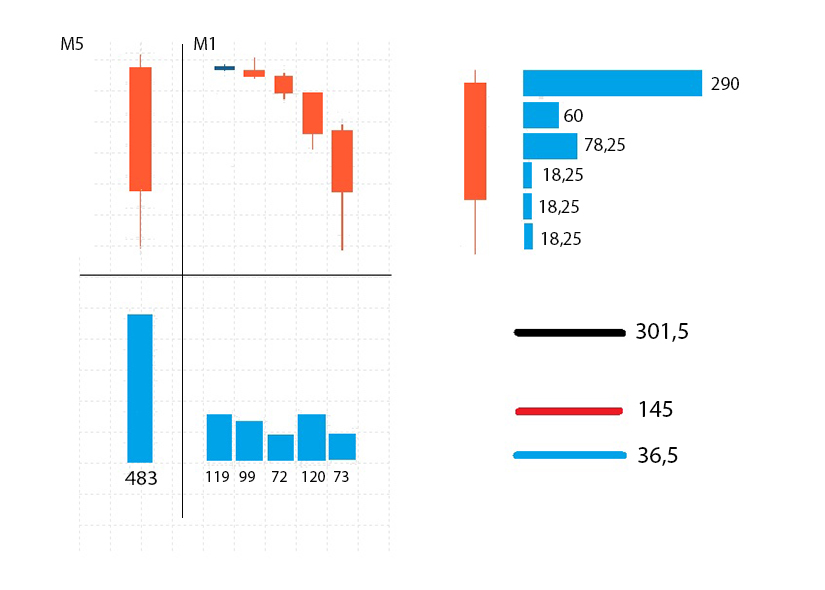 The indicator lines represent the volumes of shadows and bodies, respectively. In this case, the black line was 301.5, the bullish line was 145, the bearish indicator line was 36.5.

The Wall of Worry indicator allows you to assess market sentiment and possible reversals. The use of the indicator has not yet been fully studied, therefore other methods are possible. The main thing is to understand what the lines represent and on what principle they were calculated.
To determine the direction of the trend . The black line shows us the volumes inside the candlestick body. If it is above the other lines, it means that trading within the body of the candlesticks prevails. Then it is enough to watch bullish or bearish candles prevail to assess the trend.
Apply together with price action patterns. Accordingly, for those who use price action patterns (signals based on the form of Japanese candlesticks) can increase the reliability of the signals. For example, a pin bar or a kangaroo tail would not make sense if it was in the body and not the shadow of a candle.
Identifying Potential Pivot Points. It is possible to use the intersection or convergence and divergence of lines, as in any classic indicator.
Example 1. Chart of Brent crude oil on a four-hour timeframe. 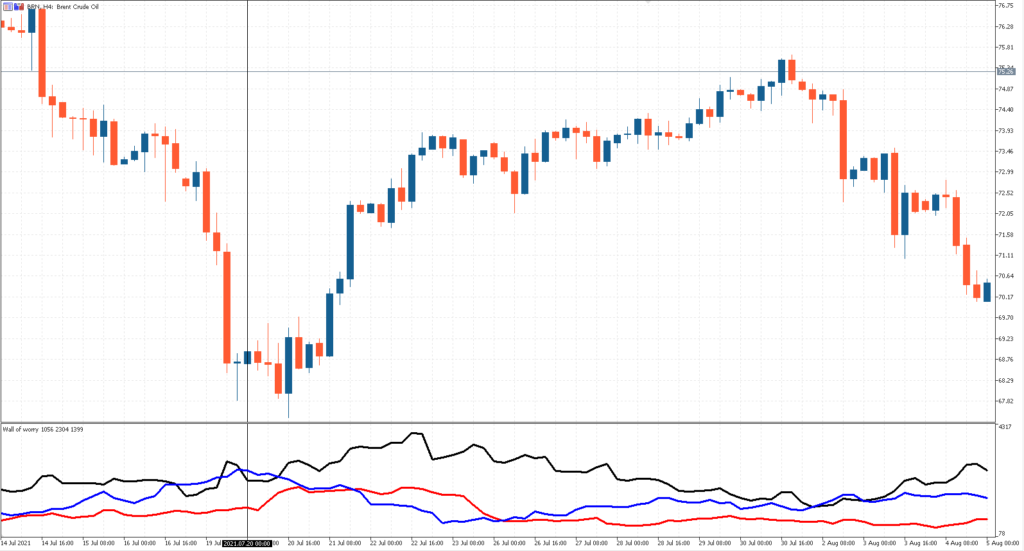 The bullish line turned out to be higher than the other lines, after which the trend line grew and the price went up. However, it should be noted that a few candles before the marked signal, there was a false signal. Therefore, you should not use only this indicator to enter the market.
Example 2. Chart of gold on a four-hour timeframe. 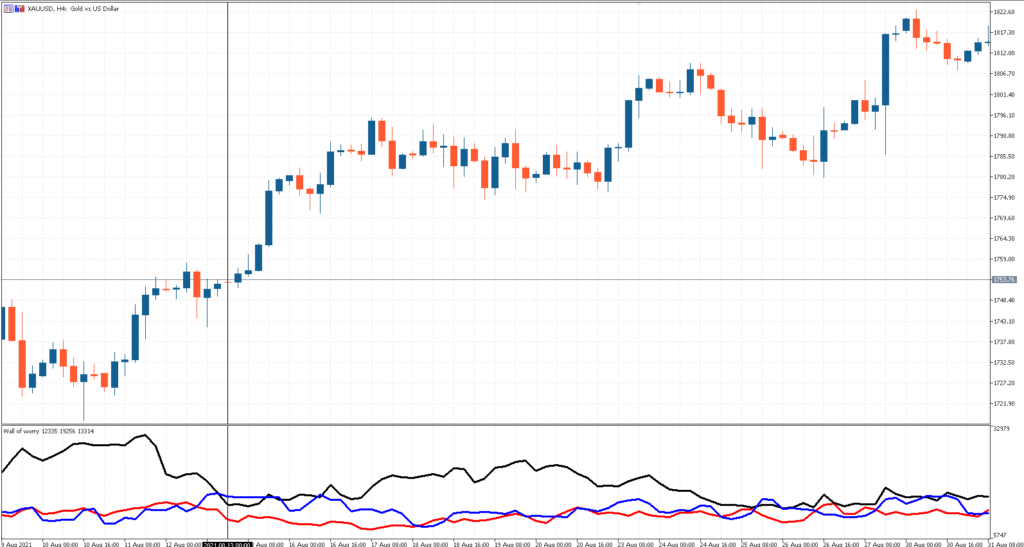 In this figure, before the given signal, there were intersections of the bulls and bears lines, which could give a better entry point. It all depends on your trading system, this indicator will help filter out false signals.
Example 3. Pfizer daily chart. 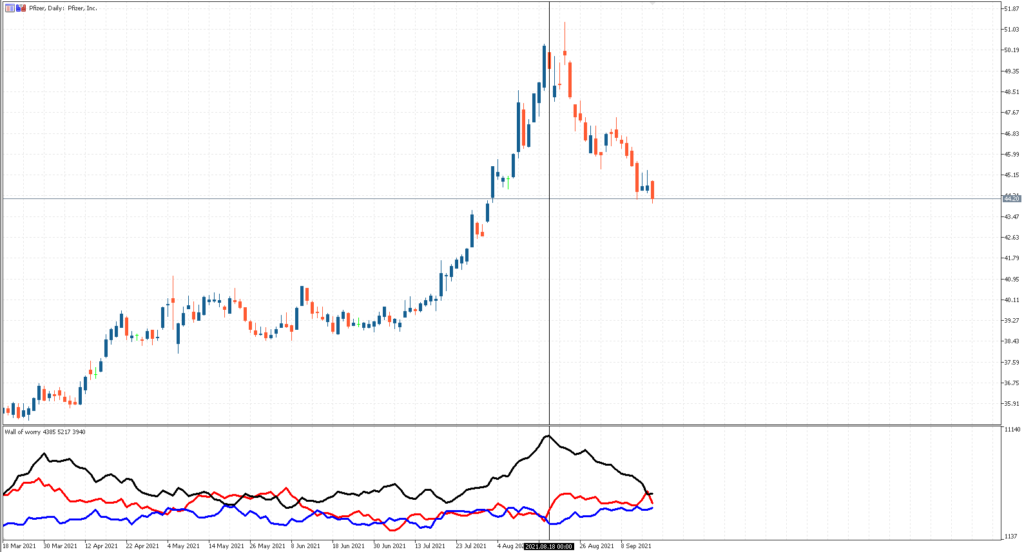 Indicator for MT4 and MT5

You can try demo versions of indicators for free in the MetaTrader 4 or 5 strategy tester. You can find it on the market called “Wall of worry” or follow the links below.

The Wall of Worry indicator is a volume indicator. Like all volume indicators, it does not bark clear signals on its own and should be used with other methods of market analysis. For example, in combination with price action or other trend indicators. Because the indicator is conceptually new, while there is not much data on its application, therefore, its wider use than described in this article is possible.