About the author and founders of the fund

Roger Lowenstein – American financial journalist and writer, ten years with the Wall Street Journal. In 2000, he described the history of Long-Term Capital Management (LTCM) in the book “When Genius Failed”.

John William Meriwether – head of the arbitration department specializing in bond speculation at Salomon Brothers. The bank convicted of fraud, dumped part of the blame on John Merivezer, so as not to lose a broker license. Salomon Brothers termination of employment did not permit John Merivezer to get a new job, so he decided to open his own hedge fund. To the new foundation, inviting Robert Carhart Merton and Myron Samuel Scholes. Two scientists come from the university environment, building theories for determining the value of securities.

In 1993, Meriwether, Merton, and Scholes established the Long-Term Capital Management hedge fund. In 1997, Robert Carhart Merton and Myron Samuel Scholes won the Nobel Prize in Economics “for a new method to determine the value of derivatives”. Also, Scholes is the author of the Black-Scholes financial model.

A brief description of “When Genius Fails”: Roger Lowenstein 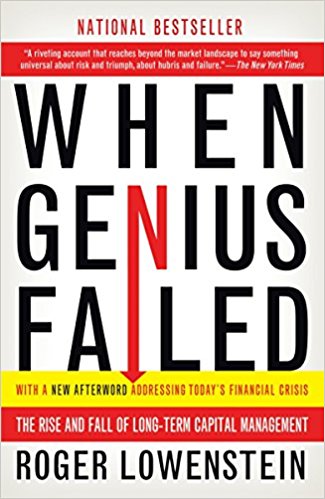 Roger Lowenstein talks about the collapse of the hedge fund Long-Term Capital Management in full detail. It’s amazing LTCM success and failure stories. If you are not interested in the world of finance, some details of the book will pass by, leaving an unpleasant impression. For an experienced trader or investor, the book will be an occasion to once again think about strategy, about the nature of risk and the human factor.

Roger Lowenstein described the story in subtleties, but so that it was clear to a wide range of readers. The company included future 1997 Nobel Prize winners in economics Robert Carhart Merton and Myron Samuel Scholes, and other professionals. In 1994, a hedge fund was opened on a minimum deposit threshold of 10 million dollars and managerial remuneration – 25%, investor capital amounted to $ 1.3 billion.

LTCM experts used mathematical models and the Black – Scholes formula for trading. Strategies tested on historical data in less than 5 years. Over the years there were no crisis phenomena, therefore such phenomena were not taken into account by the models. According to the Black – Scholes model, the key element in determining the value of an option is the expected volatility of the underlying asset. The only drawback to the formula is that normal volatility distribution is allowed. Defold LTCM confirmed that this is not true.

The first time the annual income of the hedge fund was more than 40%. For more than four years, traders have managed to beat the Dow Jones Index. And achieved impressive profits, the only drawback – a huge leverage (1 to 13 – 1 to 30). However, after the Asian financial crisis of 1997, the Russian financial crisis of 1998, when it seemed that the magic formula of eternal success was found, everything collapsed. The company dictated to banks the conditions on which it took, loans in a matter of months was on the verge of bankruptcy. In 1998, fund with leverage (30) lost $ 4.6 billion in less than four months.

Roger Lowenstein in his book “When Genius Failed” describes in detail the process of negotiations between bank leaders and a representative of the Federal Reserve System (the Fed) to save the fund from default. As the history of LTCM shows, the modern financial market is sometimes ineffective and vulnerable, and incapable of self-regulation. Only through the intervention of the Fed, which forced private banks to cooperate and became a coordinator of joint efforts, did it eliminate the threat of market closure caused by a possible default of Long-Term Capital Management.

The story once again proves that fitting life to mathematical formulas is self-deception. This was not possible even for Nobel laureates in economics, although the formula worked for 4 years. Brilliant intellectuals made a mistake widespread among traders: they did not overcome the psychological attachment to open positions (the effect of dead costs), which are became deeply personal for them, because believed in their infallibility against the backdrop of 4 successful years in the market. John Meriwether’s team closed the fund in early 2000, paying a minimum profit to creditor banks and investors.

Sometimes you can beat the market. With a lot of luck, it will turn out several times, very rarely – even several times in a row. But to do it all the time is impossible. A large game requires extreme caution and the strictest self-discipline, especially when trading with leverage.

1. Risk diversification. The book  “When Genius Failed” details how scientists and experienced traders made deals for a huge amount around the globe. They used the same strategy. Thinking that there is less risk of holding similar bonds around the world than bonds of one country. The financial markets of all countries are interconnected and strongly correlated. If US stock indices go up, then indices around the world also go up, but at different rates. 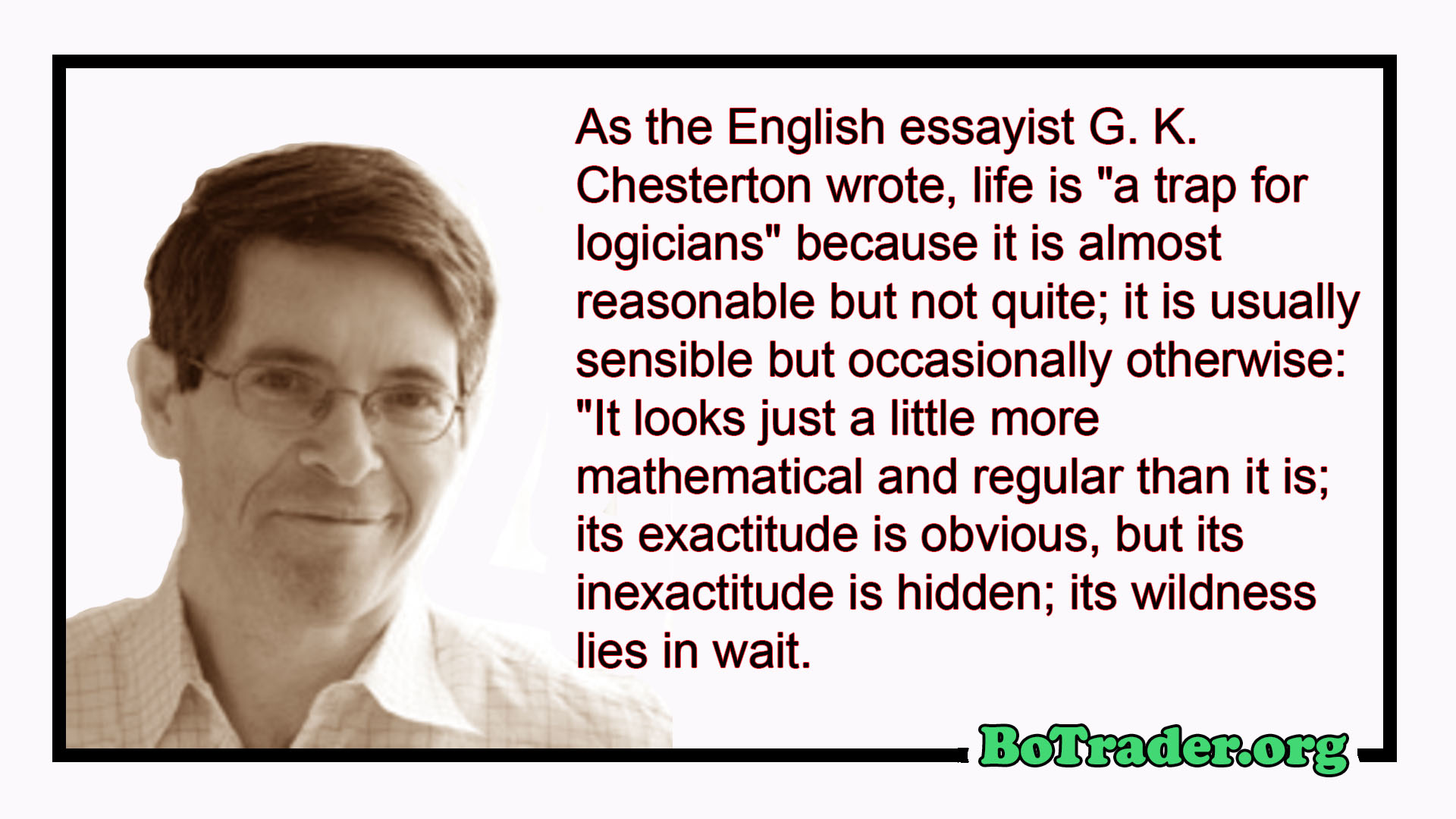 2. The leverage (borrowed funds) used by Long-Term Capital Management in operations ranged from 13 at the beginning of the fund and up to 100 at the end. In the US stock market, you can’t trade with a leverage of more than two. But mathematicians circumvented these limitations, thereby endangering not only the welfare of investors, but also the functioning of the financial system as a whole.

3. Trading Strategy on the Black-Scholes formula. Key concepts in bond trading relied on this model. The main assumption of this formula is the normal distribution of volatility. As soon as the market behaves differently, the formula does not work. The managers of Long-Term Capital Management proved this, for four years the market was calm and close to normal distribution, but as soon as the market left it, LTCM went bankrupt.

4. Human factor. Under the influence of the luminaries of science and simply strong personalities, almost all Wall Street banks conducted operations with LTCM on preferential terms and in the absence of a margin deposit. This has created a difficult situation for the banking system in the event of bankruptcy of the company. 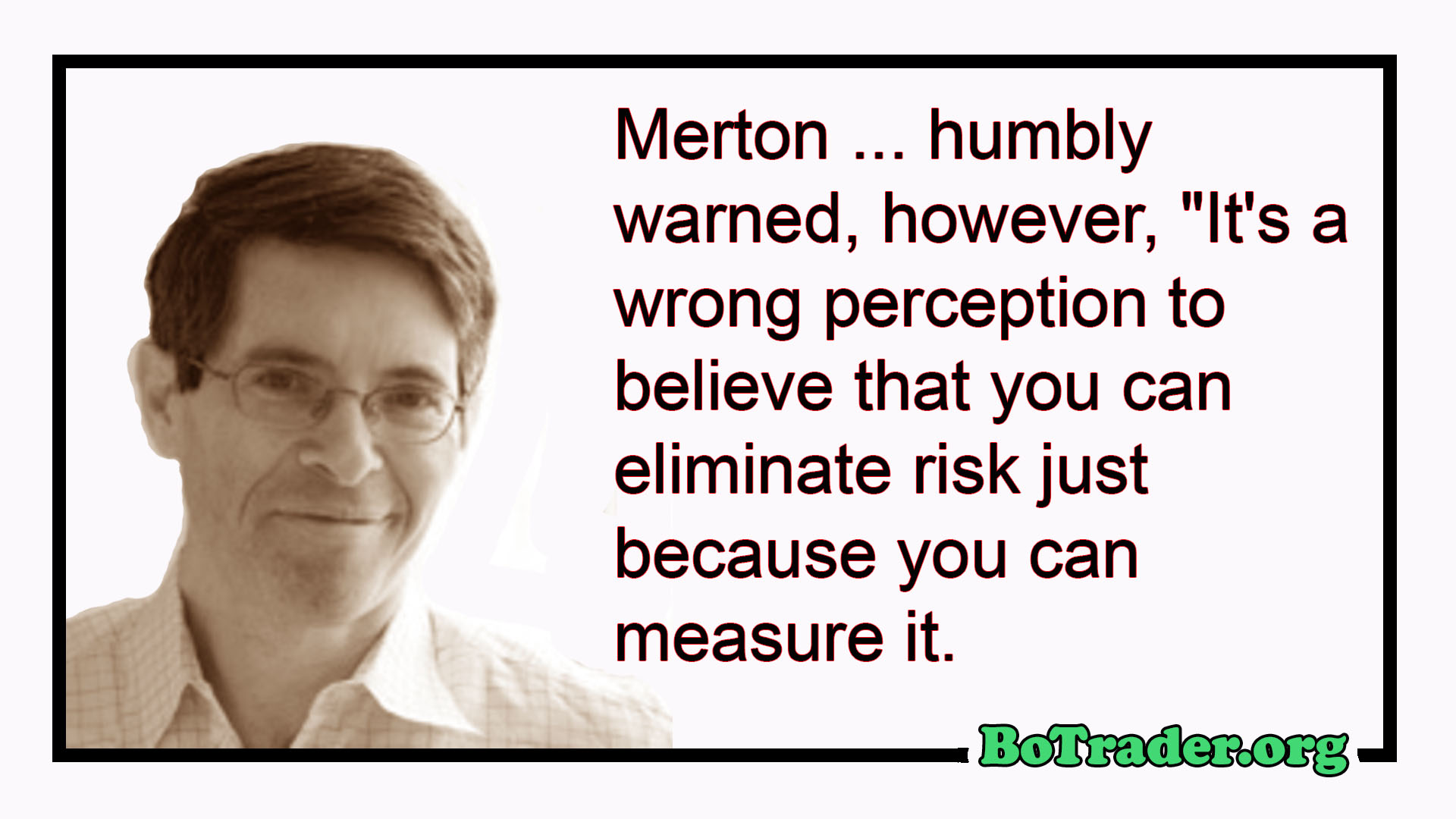 5. It should be understood that even being guided by an incorrect theory, which is extremely far from reality, it is completely optional that at some point in time the results will not coincide with theoretical predictions. In fact, the positive results obtained by the fund in the first three years of its existence are explained by simple reasons. High professionalism of employees in the field of concluding transactions with minimal costs (preferential credit terms), which was possible due to extensive connections on Wall Street, a large leverage and a share of luck.

As the history of LTCM shows, the modern financial market is not a mythical efficient machine and is very vulnerable, and is not always able to quickly self-regulate. It was assumed that in the event of the bankruptcy of Long-Term Capital Management, large banks (liquidity counterparties), which were more than 25, would suffer, which could lead to unimaginable consequences. Therefore, to save LTCM, 12 banks chose to invest $ 300 million in the fund. Better $ 300 million potential losses than losses that cannot be estimated.

I read the book “When Genius Failed” to understand why people so blindly believed in the formula. It was based on familiar feelings: greed, fear and hope. This book nudges a possible development of events in our time. People don’t learn from their own or others’ mistakes. Each time, the same rake is skillfully masked until a blow occurs again. On average, every decade there is a strong shock for the economy, after which economic theory develops further. The last crises were in 1987, 1998, 2009, and now 10 years have passed since the last crisis, but nothing has changed. Now the bull market is setting a new record in terms of duration, perhaps it is time to reassess the risks and reallocate resources.